© 2022 Alphabeautics. The Tea From Baby to Bae and Beyond.
Home Baby 88.5% of Users Don’t Recommend Dreft Baby Detergent*
Baby 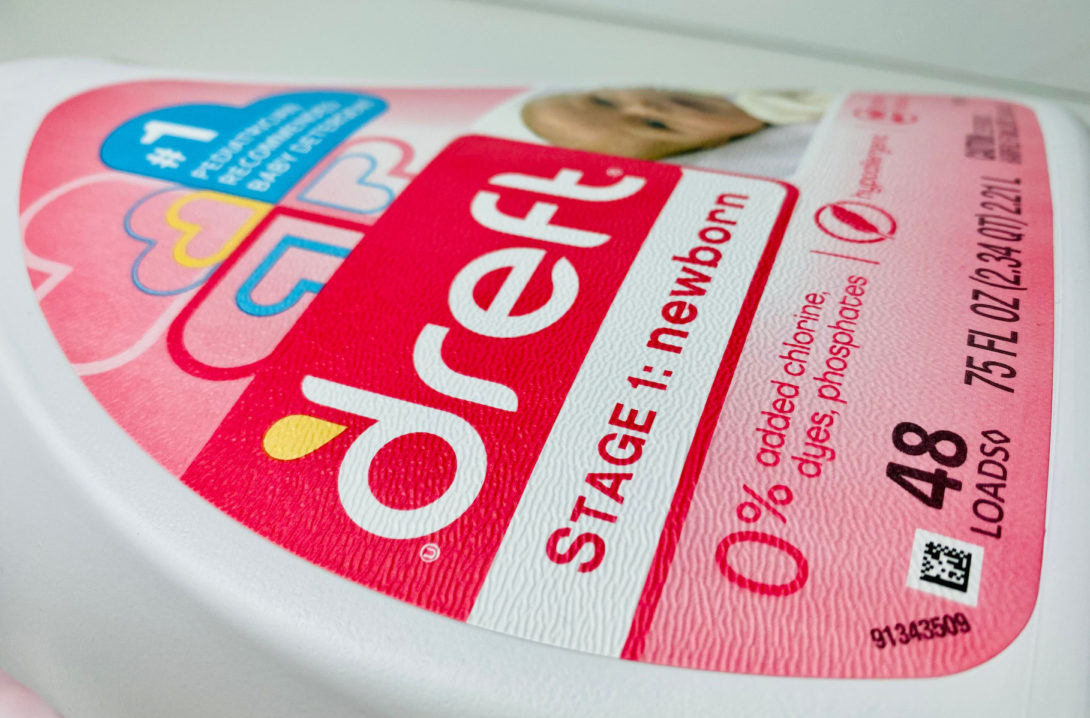 Ahhh… Dreft®. The translucent pink bottle caps, the pulsating hearts, and the pediatrician’s highest recommendations…. The flowing silky sheets and the smiling babies… the proprietary testing, and the publicly unavailable substantiating surveys….

And, oh the full ingredients that aren’t to be found in popular product descriptions or on the product itself. (P.S. They’re here.)

Alas, the inbred recommendations from one P&G company (Pampers) to another (Dreft).

Three hours ago I ditched the dregs of a 75 oz. bottle of Dreft Stage 1: Newborn laundry detergent.

My own personal take on the product is no more noteworthy than the next parent’s.

But another one-star one-liner rating is lost in the fray and Dreft, in its October 2019 re-formulation, has changed something so basic about the product that it’s worth a broader look.

Most complaints about the new formulation revolve around its stench.

A handful of users report rashes and allergic reactions:

My son is having an allergic reaction to it as well 🙁

@Dreft No label change, no warning, nothing. 👎🏼😖 The scent of our Stage 2 detergent now smells like shampoo. Overpowering for sensitive littles.

As of May 11, 2021, Dreft Stage 1: Newborn Baby Laundry Detergent has accumulated just over 1,000 customer reviews on CVS.com.

Every review has a title, a sentence or three of user feedback, and most pertinently, the user’s selection of either one of these two statements:

Note that almost none of these reviews are from CVS customers but are auto-reposts from Dreft.com. CVS.com was just the easiest site to access, sort, and download the reviews.

Dreft once had what seemed to be a great product going for them, but I don’t believe it was ever a good or clean option for baby clothing.

(We contacted P&G’s media team about Dreft 10 days prior to publishing this article but did not hear back.)

One can only deduce that one or more of these same detergents make up what Dreft promotes as the “#1 pediatrician recommended baby detergent” according to a “2018 survey of US pediatricians conducted by Dreft.”

Dreft ingredients that EWG suggests are of concern are sodium borate, ethanolamine, fragrance, and diethylene glycol.

Think Dirty Rates Dreft a 9 on its ‘Dirty Meter’

According to Essential Moves to Wellness, Procter & Gamble (Dreft’s parent company) bought out the company behind the Think Dirty app—and yet Think Dirty still rates the product a 9 out of 10.

(In a February 2020 podcast, Cassandra McClure shares that she and friends noticed that after P&G bought out Think Dirty, ratings of some P&G brand products were changed/lowered on the Dirty Meter, thus the comment.**)

This rating places Dreft into a class of products that Think Dirty defines as:

Dreft ingredients that Think Dirty suggests are of concern are diethylene glycol, fragrance, and borax.

10 out of 12 Baby Laundry Detergent Mfrs. are More Transparent than Dreft in their Ingredients

Do what any of 10,000 people do monthly—type “baby laundry detergent” into Amazon. Here’s what we get and what we’re using as a baseline for comparisons in ingredient transparency:

Dreft’s manufacturer refuses to release their self-conducted survey of pediatricians that apparently substantiates their claims.

They say their latest survey of pediatricians was done in 2018, a year before the new formula came out, but nowhere do they offer any data or details on how it or prior surveys were conducted and on whom exactly.

Are “pediatricians” recommending a manufacturer or a particular product? If so, which pediatricians? And what product exactly?

Meanwhile, my real-world pediatrician tells me it’s “pretty obvious” that Dreft caused the rash “since it’s so loaded with fragrance.”

Dreft’s plant-based formula is fragrance-free, unscented, and has no added dyes, chlorine, phosphates, or brighteners.

Our Correspondence With Dreft

Alphabeautics reached out to Dreft via social media and by email on May 11th and 12th.

👋 @Dreft Any insight or info available on the yr 2016 or yr 2018 surveys of pediatricians that discovered/support this statement? 🙏 pic.twitter.com/iRUzFh8wML

“We may not have information on the year this statement was made but it still remains the #1 pediatrician-recommended brand of baby detergent.”

We asked if we could speak to someone or submit written questions for this article and were referred to the P&G media team. We completed an internal form and sent an email as asked, but had not received a reply to the form or the email by May 22nd.